Watch Me: A Story of Immigration and Inspiration (Hardcover) 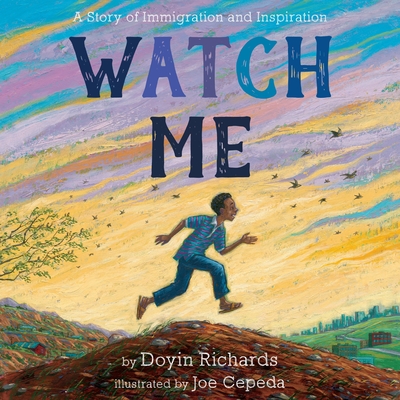 A picture book about immigration, Watch Me is based on the author's father's own story.

Joe came to America from Africa when he was young. He worked hard in school, made friends, and embraced his new home. Like so many immigrants before and after him, Joe succeeded when many thought he would fail.

In telling the story of how his father came to America, Doyin Richards tells the story of many immigrants, and opens the experience up to readers of all backgrounds. Here is a moving and empowering story of how many different people, from different places, make us great. Acclaimed artist Joe Cepeda brings the story to life with beautiful paintings, full of heart.

Doyin Richards is a father, husband, writer, consultant, and public speaker inspiring mothers and fathers to think, laugh, and learn while evolving as parents and couples. He is the author of the popular parenting blog Daddy Doin' Work, and the book, Daddy Doin' Work: Empowering Mothers to Evolve Fatherhood, and has appeared on nationally broadcast television shows including the Today show and Good Morning America. He lives in Los Angeles with his wife and their two daughters.

Joe Cepeda was born and raised in East Los Angeles. Joe’s journey through college began with studying engineering at Cornell and finished with a BFA in Illustration from Long Beach State. Months from leaving school, Joe went to New York and secured a book contract after his first meeting with a publisher. He’s now the award-winning illustrator of more than thirty books for children, including the Pura Belpré honor book Juan Bobo Goes to Work, written by Marisa Montes.

A BookRiot Best Picture Book of 2021 So Far

"In an inviting, conversational tone, Richards introduces Joe, who is from Sierra Leone and wants to study in America. Family and friends warn Joe that he will be derided for his dark skin and West African accent. But Joe isn’t fazed, and Richards employs the refrain “watch me” as Joe considers returning home in the face of white Americans’ contempt—but decides to tough it out, and succeeds. .. A personal story with universal impact." —Publishers Weekly, starred review

"Such an important piece of work in the current world. ... A recommended immigration story. The message for children is not to give up, even when everyone else has." —School Library Journal

"In this “American dream” story, a heartfelt tribute to his father, Richards directly calls upon readers to recognize the similarities they may have with young Joe, a boy from Sierra Leone who had big dreams and the will to fulfill them despite many obstacles....Richards urges readers to look around and notice how people treat one another and to pay attention to the nuances, which are captured in Cepeda’s evocative illustrations of facial expressions and clever composition. Bold, fresh, and contemporary, the images carry the emotional weight of the deceptively simple narrative." — Booklist

Praise for I Wonder:

"[A] powerful book for children celebrating differences. ...In Richards’s words: “take a look at yourself. Your friends may not look like you, and that’s a good thing. Because when it comes to love, keep showing that there really is no difference.” A ... perfect read-aloud for young students."--School Library Journal