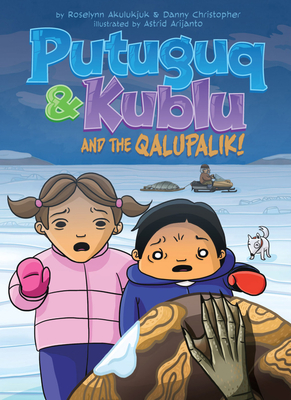 What creatures lurk beneath the sea ice?

Putuguq and Kublu – two siblings who can’t seem to get along- are about to find out!

On their way to the shoreline, Putuguq and Kublu run into their grandfather, who has a stern warning for the pair: always beware when playing on the shore, because you never know if a qalupalik, a mythical creature that kidnaps children, is lying in wait under the ice.

Kublu is pretty sure their grandfather is just trying to spook them with a scary story from the past….but maybe not?

Roselynn Akulukjuk was raised in Pangnirtung, Nunavut. In 2012, Roselynn moved to Toronto to pursue a career in film and attended the Toronto Film School, where she fell in love with being behind the camera. Roselynn’s short film The Owl and the Lemming was adapted to a children’s book of the same name in 2016. The book has been nominated for 2018 Blue Spruce Award and the 2017 Shining Willow Award and was included on the Cooperative Children’s Book Centre’s Best-of-2017 list. Danny Christopher has travelled throughout the Canadian Arctic as an instructor for Nunavut Arctic College. He is the illustrator of The Legend of the Fog, A Children’s Guide to Arctic Birds, and Animals Illustrated: Polar Bear, and author of Putuguq and Kublu. His work on The Legend of the Fog was nominated for the Amelia Frances Howard-Gibbon Illustration Award. He lives in Toronto with his wife, three children, and a puppy.Astrid Arijanto is a designer and illustrator who spent her childhood drawing on any surface she could get her hands on: from papers to walls to all the white fences around her parents’ house. Since then, her work has appeared in various media and publications across Canada and Asia. She lives in Toronto and spends most of her days designing and illustrating beautiful books. In her free time she enjoys travelling with her partner, exploring the great outdoors, and chasing after their wild and rambunctious puppy, Spanky.